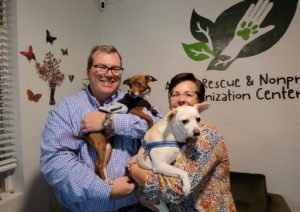 I did not think I would be ready to open my heart to get another fur baby this year, but in October we started feeling like we may want to adopt another dog. Peanut was seeming gloomy and we were thinking he needed a companion during the day when we are at work. We felt this when we adopted Ladybug but they could have taken or left each other, they simply coexisted and every now and then they fought. This was a concern for us this time, we wanted to be sure that Peanut and our new family member were friends.

I’d like to start by saying, due to Covid almost everything had to be online, this made it a little frustrating trying to adopt. By the time we got through to people to request a meet and greet, every dog we were interested in had been adopted. On November 4, when I found Gomez’s profile, he was so cute with his floppy ear and underbite, I really wanted to meet him! Because of the issues with meeting dogs before they were adopted, I was persistent, I found a phone number right after filling out the application and called. The lady responded via text right away and said “please text me”. In a text message I expressed the challenges we had in meeting dogs before they were adopted and that we really wanted to meet Gomez. She was really sweet and went into action right away. She emailed me a packet, followed up on our application and references and set up a meet and greet for us the following day. On November 5, we, including Peanut, all went to South Tampa to meet Gomez. His foster mom drove up with him and we could tell right away he was scared to leave her. She was great and really helped him get comfortable with us and we all went into the play yard to see how they did with each other. There was some trepidation on both Peanut and Gomez parts but after a few minutes you could see they would get along well. We decided to adopt Gomez into our family.

A little bit about Gomez’s story: the rescue lady told us Gomez had been found on the boat docks with several siblings eaten up with fleas, hungry scared and in a sad state of affairs. I don’t really understand how people can do that to Jehovah’s little creatures. If his siblings are anything as sweet as him, I can’t imagine anyone putting them out on their own!

It has been 2 months since we adopted Gomez. I’ve never had a puppy before so there have been some challenges – the biggest for me is potty training!!! There have been many accidents and we had to remove a couple area rugs, but it seems we are almost there. Since he can fit between the rails of our fence, we had to put up a “puppy fence” to keep him contained to the back yard when we take them out. He was trying to chew on my shoes, but I think we finally have that under control. Challenges, but absolutely worth it!

Gomez has settled right into the family and as you will see from the photos, he and Peanut have become very close. They love each other and that makes us very happy. He is so sweet (he’s a cuddler), he has LOTS of energy and has been so good for Peanut. Throughout the day they are running through the house chasing each other (it’s hilarious, they sound like a herd of cattle), wrestling and playing. Gomez loves his toys and they are constantly all over the floor. Don’t bother putting them away, he just pulls them right back out; very reminiscent of Ladybug when she was healthy. Gomez needed a home and we (including Peanut) had a space to fill. While we still miss our sweet little Ladybug, Gomez has wiggled into our hearts and filled a void. Thank you Mercy Full Project for helping make this happen!