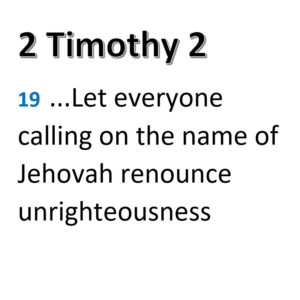 In 2 Timothy 2:19, Immediately preceding “Let everyone calling on the name of Jehovah renounce unrighteousness” it says “Jehovah knows those who belong to him”. That is a quote from Numbers 16. Numbers 16 is the story of Korah, Dathan and Abiram; individuals who were openly disrespectful to Moses and rejected his God-given authority. They challenged Moses and Aarons authority over his people. In response, at Numbers 16:5 we find Moses reply.

Then he said to Korah and to all his supporters: “In the morning Jehovah will make known who belongs to him and who is holy and who should approach him, and whomever he may choose will approach him.”

Here Jehovah says he will make known who belongs to him, and who is holy and who should approach him. In 2 Timothy this statement was coupled by Paul with “All of those calling on him should renounce unrighteousness”. Essentially Paul is saying Jehovah knows who is unrighteous, after all he is the reader of hearts.

So, how did the Israelites renounce unrighteousness ? By actively separating themselves from the unclean rebels. In Numbers 16:23 we read that Jehovah instructed Moses to tell the congregation to “Get away from around the tents of Korah, Dathan, and Abiram!”. This was actively removing oneself from even being near the unrighteous individuals. In this example, simply abstaining from supporting the rebels wasn’t enough.

Then Moses said: “By this you will know that Jehovah has sent me to do all these things, that it is not of my own heart: If these people die a natural death as all men do and if their punishment is the same as that of all mankind, then Jehovah has not sent me. But if Jehovah does something extraordinary with them and the ground opens and swallows them and everything that belongs to them and they go down alive into the Grave, you will certainly know that these men have treated Jehovah disrespectfully.”

Later we see Jehovah did indeed caused the earth to swallow them up. It was only by renouncing the rebels, by physically separating themselves from them, that the congregation was not swallowed up with their unrighteousness. This is a good example for us today showing us just how Jehovah was directing the congregations to separate themselves from the wicked. So, whether it’s the friends we keep, our choices in entertainment or the many other snares that Satan has set for us, if we are to please Jehovah, we must not just abstain from unrighteousness, but we must renounce it. We must take decisive action in order to protect our relationship with Jehovah and separate ourselves from anyone and anything that is unrighteous.