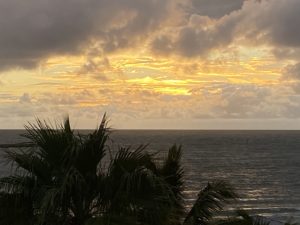 Jehovah always existed; he has no beginning or end so he was there before creation. The beginning of God’s creation was “the Word”. What or who is “the word”? If you continue reading this chapter of the Bible, we learn the answer…So the Word became flesh and resided among us, and we had a view of his glory, a glory such as belongs to an only-begotten son from a father; and he was full of divine favor and truth.  John 1:14

What!!!???  The WORD became flesh??? I had an “AHA!” moment; now it makes sense!  Once I wrapped my brain around this concept, I went “scuba diving” into the scriptures. Jesus is the word, he is God’s spokesperson to mankind, he is our model.  Now it was getting clearer, Jesus became flesh and was God’s spokesperson to mankind while he was on earth.  Who better for the job since Jesus had been with God throughout millions, possibly billions of years during creation?  Who else could know Jehovah better?

I was still a little confused…” and the Word was a god”, I had to figure that out!  Guess what, I did!  God created Jesus (in his heavenly form) when God was the only thing in existence, therefore being the first creative work of Jehovah, he is God’s “only begotten son”. The beginning is used because the “Word” (Jesus), was the FIRST thing created and through him all other things were created.  “He is the image of the invisible God, the firstborn of all creation; because by means of him all other things were created in the heavens and on the earth, the things visible and the things invisible, whether they are thrones or lordships or governments or authorities. All other things have been created through him and for him” – Colossians 1:16. Jesus is divine in nature and being the contractor to God’s architectural plans of creation, he is mighty but, he is not the ALMIGHTY God, Jehovah..

Jesus acknowledged he was not God. For example, in the wilderness while being tempted by Satan, he said: “Go away, Satan! For it is written: ‘It is Jehovah your God you must worship, and it is to him alone you must render sacred service.’” – Matthew 4:10. He taught his disciples and us to pray to his “Father in the heavens”: “You must pray, then, this way: “‘Our Father in the heavens, let your name be sanctified.” – Matthew 6:9. He talked about his Father in the heavens throughout his earthly ministry, I count ten instances in Matthew and Mark alone.

Jehovah tells us he is a god requiring exclusive devotion, we are not to worship any god but him.   Jesus being his son and knowing him so well, would have known this about his heavenly father. Therefore, while Jesus is divine, he is not God, so we are thankful for his willing ransom sacrifice and that he loved us enough to endure all he did. He is our WAY TO GOD, but he is NOT GOD.  Jehovah is God and he alone should receive our exclusive worship.

Jesus paved the way for us to be reconciled to our Heavenly Father.  So as the spokesman for God on earth, he taught us many things that help make our lives better, he taught us in understandable ways through illustrations and parables why doing things God’s way is best, he taught us about love of neighbor, compassion, and what God’s Kingdom will do for obedient mankind.  We know it can happen, because while Jesus was on earth he gave mankind a taste of what God’s Kingdom promises to bring. He healed the sick, raised Lazarus from the dead, fed the hungry and showed compassion to all people. Likewise, among many other things, God’s kingdom promises to eradicate the major plagues of mankind such as sickness, hunger, war and death. Jesus is the king of God’s Kingdom, there could be no better ruler for us since he has been human and understands our fleshly desires and weaknesses.

In closing, I have to say, this has been a great exercise for me to learn more about “The Word” and what it means for me. I appreciate that Jehovah and Jesus love me so much that Jesus sacrificed everything to leave heaven and come to earth as a helpless baby to be raised by imperfect human parents, subjecting himself to them and ultimately suffering an agonizing death so that I can have an opportunity to gain back what our original human parents, Adam and Eve, selfishly lost for all of us….everlasting life in perfect conditions, with other perfect humans on paradise earth. I hope this helps others understand the meaning of this scripture in John 1:1 when it speaks of “the Word”.