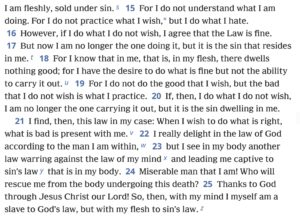 These words were written down almost 2,000 years ago by a man named Paul. This particular man used to be called Saul, often referred to as “Saul of Tarsus” for his birthplace in the ancient city of Tarsus near the Mediterranean coast in what is now days Turkey. Saul was a Jew in the time of Christ and as stated at Acts 23:6 he was “a Pharisee, a son of Pharisees“. A Pharisee was a Jew who was a strict observer of God’s law and opposed any sort of outside influence on their faith. As you can imagine someone who opposed outside influence on his faith in the first century C.E. might have a problem with a certain man named Jesus who was preaching and teaching salvation. Saul was such a man and spent much time persecuting those early Christians. Acts 8:1-3 tells of his ravaging the early Christian congregation. In fact, Saul was a well known persecutor and murderer of the early Christian congregation.

Those who don’t know the story then might find it surprising that this man, this vehement persecutor of Jesus and his followers, ended up becoming one of Jesus most famous Apostles, even being called “Apostle to the nations” (Romans 11:13). Some time after Jesus execution Saul was on his way to Damascus to round up early Christians and bring them back, bound, to Jerusalem. As he was traveling a sudden light flashed around him and he and his traveling companions heard a voice saying “Saul, Saul, why are you persecuting me?” (Acts 9:4). The voice he heard was that of Jesus who had been executed in Jerusalem already. Jesus blinded Saul and sent him to Ananias in Damascus, where his journey to becoming Paul the Apostle to the Nations would begin.

Back to the original point, miserable man that I am! This man who was such a staunch persecutor of those early Christians, now had been called by Jesus himself to become an Apostle! In fact he became one of the most prolific writers in the Christian Greek scriptures (some call this the “New Testament”). Paul wrote more books of the Christian Greek scriptures than anyone else! It is true, God is the reader of hearts (Jeremiah 17:10) and clearly he and Jesus knew Paul’s heart and what a fine Apostle he would make.

So this man, the staunch Jew turned Christian, hand selected by Jesus himself, now writes in Romans 7:24 the words you find in this title. He was speaking about the war in his body. In Romans 7:15 he states “For I do not understand what I am doing. For I do not practice what I wish, but I do what I hate.” So this man, appointed by Jesus as Apostle to the Nations, is telling us that he is struggling with his desire to do what is right by God’s law, but he fails and “practices what he hates“. Imagine that, an Apostle struggling with sins too. Sometimes it is easy to get down thinking that here I am, almost ten years into this journey to serve God and I still struggle with so many shortcomings and sins. Sometimes it is enough to get you down. But, then I am reminded of Paul, and his struggles that he openly shared with me in Romans Chapter 7. I find comfort knowing I am not alone and that such a man can be approved by God.

3 thoughts on “Miserable man that I am!”